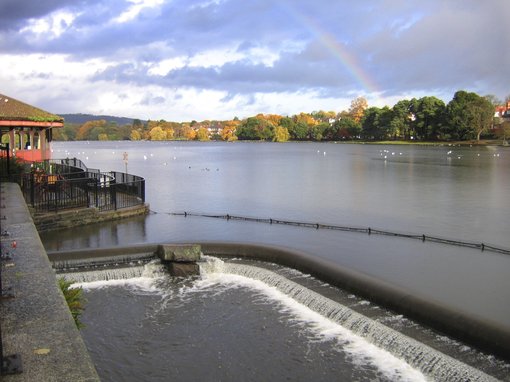 Opened in 1894, Roath Park is one of the most important late Victorian public parks in Wales. The park retains much of its original character and setting with many fine trees and a heated conservatory. Roath Park Lake, home to the Scott Memorial lighthouse, is one of Cardiff’s iconic landscapes.

Roath Park was laid out on land gifted to Cardiff Corporation in 1887 by the Marquess of Bute and several other land owners. It was designed and laid out from 1889 onwards by William Harpur, engineer to Cardiff Corporation and W.W. Pettigrew, who was employed as Head Gardener to the Corporation in 1892. The park comprises a series of landscaped spaces which extend along the Roath Brook and Nant Fawr stream, covering some 52.7 hectares (130 acres).

Roath Recreation Ground at the southern end of the park was the first section to be completed. This area is unfenced and accommodates sports pitches and a children’s playground. The ground is surrounded by a line of mature trees on three sides and attractive villa style houses look onto the park. This was the home of Welsh baseball, which developed from the more traditional game of rounders in the latter part of the 19th century and is still played regularly in South Wales.

Roath Pleasure Garden was laid out as the ornamental area of the park for promenading around well kept lawns and flower beds. In the early part of the twentieth century, bowling and tennis facilities were installed and these are now set within a landscape of grass and attractive mature trees including various oaks, plane, birch, copper beech, dawn redwood and a large tulip tree.

The greater part of the park lies north of the former railway line, now the A48 Eastern Avenue. Roath Botanic Garden lies south of the lake and was laid out for educational purposes. The area now occupied by the rose garden was once the natural order beds where students of botany and medicine could study plants. The heated Conservatory now provides an opportunity to see temperate and sub tropical plants growing throughout the year. These gardens also benefitted from the close association between W. W. Pettigrew and his former place of learning, Kew Gardens, and boast a wide range of mature trees and shrubs.

At the northern end of the Botanic Garden, the dam provides a promenade over which the 11.7 hectare (23 acre) Roath Park Lake can be viewed. The Scott Memorial Lighthouse in the lake commemorates the ill fated expedition of Captain Scott to the South Pole in 1910, for which much of the coal was donated by Cardiff benefactors. The lake provides opportunities for boating and fishing and there is a resident population of wildfowl throughout the year.

North of the lake, the Wild Garden provides a shaded semi natural woodland environment where birdlife abounds. Paths through the garden eventually lead to a grassed open space at the northern extremity of the park, where a small pond, said to be a healing well, was once the site of the monastic community (or ‘llan’) of St Isan. He was one of the early Welsh saints and his Greek name, St Dionysius gives this area the name ‘Llandennis Oval’.

The park has a cafeteria and ice cream kiosk, good provision of public toilets, two children’s playgrounds and a boat stage where rowing boats and other craft can be hired.

Opening Hours: Llandennis Oval, Wild Garden, Roath Park Lake and Roath Recreation Ground are open at all times.Roath Botanic Gardens, the promenade and Roath Pleasure Gardens are open from 7.30am to around 30 minutes before the nationally published sunset time for Cardiff.