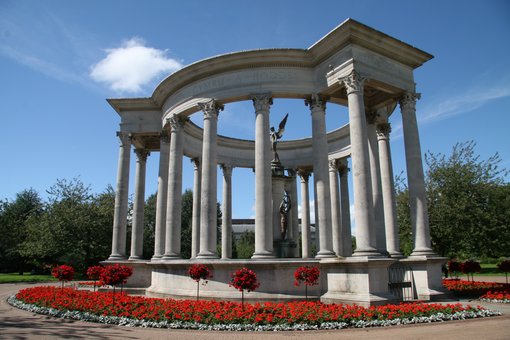 Cathays Park is Cardiff’s civic centre, developed in the early years of the twentienth century when Cardiff was elevated to city status. Here, a range of magnificent late Victorian, Edwardian and later twentieth century buildings sit in a parkland landscape with attendant tree-lined spacious roads and quiet gardens.

The land at Cathays Park was originally the site of a farmstead. The land was acquired by the first Marquess of Bute who demolished the original house in about 1812 to build a new house for his second wife. Unfortunately the new mansion was short-lived as he died in 1814 and his successor, his grandson, had the house demolished in 1824.

As the castle developed, the Cathays Park land became part of the castle estate. Cardiff Corporation approached the third Marquess of Bute on several occasions during the latter half of the nineteenth century to purchase the land for a park, but were rebuffed. On one occasion they were informed that his Lordship could not relinquish that land as he would have nowhere to ride his horse when in town.

From 1873 onwards, as the Castle Pleasure Grounds were developed, the Cathays Park land became the productive part of the garden. Andrew Pettigrew, was brought down from Scotland in 1873 and established in a new house, Castle Lodge, within Cathays Park. Along with Lord Bute, Pettigrew oversaw the development of the estate including extensive orchards, a nursery garden with glasshouses for food production and the planting of a double avenue of elms through the park.

Eventually, in 1897, after protracted negotiation, the Marquess of Bute was persuaded to sell the land to Cardiff Corporation. The reason for his change of heart was the vision of a grand municipal civic centre in a parkland setting. Certain stipulations were made about the existing landscape giving rise to the retention of the avenue of trees, which became King Edward VII Avenue, and the development of the open spaces around which the buildings would sit.

The plans for the park were drawn up in 1899 by William Harpur, Municipal Engineer to the corporation, working with W. W. Pettigrew, eldest son of Andrew Pettigrew, who was appointed Head Gardener to the Corporation in 1892.

At the heart of Cathays Park is Alexandra Gardens, the central garden laid out in 1903. The Welsh National Memorial of the European War, unveiled in 1928 – a magnificent Portland stone memorial of exceptional quality, forms an imposing central feature to the gardens. Later memorials have been erected to the fallen at the Falklands War and the Spanish Civil War.

South of the garden is City Hall, flanked on either side by the Law Courts and the National Museum of Wales, Cardiff. In front of this lies the Gorsedd Gardens, a small informal garden named after the standing Gorsedd Stones that were re-erected here in 1905 having been used previously for the National Eisteddfod of 1899 which was held in Cathays Park. This park holds a number of important statues of notable figures in Cardiff’s civic life.

Further south again lies the Friary Gardens now bounded by roads on two sides. The dock feeder canal runs through the northern part of the gardens and the northern bank is enclosed and planted according to the wishes of the third Marquess of Bute.

The south part of the garden is laid out as a formal parterre with box hedges enclosing seasonal planted beds and gravel paths. This was initially known as the ‘Dutch Gardens but later renamed the Friary Gardens to commemorate the nearby site of the Greyfriars friary.

Opening Hours: Cathays Park is open at all times

Group information: Coaches by arrangement – coach parking available nearby, contact the Parks and Sports Service on the above number for more information.There are no toilets at Cathays Park – public toilets area available nearby in the City Centre.

Accessibility information: All the parks are easy to access and wheelchair friendly.